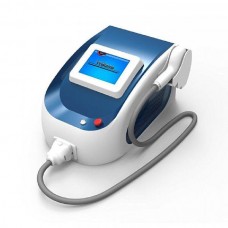 Laser hair removal is considered one of the most popular methods to eliminate unwanted hair in cosmetology, as it guarantees a long cessation of their growth on the treated skin areas, has a limited number of contraindic... Read more...

Laser hair removal is considered one of the most popular methods to eliminate unwanted hair in cosmetology, as it guarantees a long cessation of their growth on the treated skin areas, has a limited number of contraindications, does not cause side effects, does not require the use of painkillers. These qualities of the technique have guaranteed laser hair removal a great popularity among customers of beauty salons and the recognition of cosmetologists. The world's leading manufacturers of cosmetological equipment annually launch new models of devices on the market, which are characterized by increasingly progressive features, and the EMS Beauty company offers one of these devices to Italian cosmetologists. This device is a diode laser for hair removal AURORA, which, unlike other similar devices, is characterized by the longest possible working life with the stable maintenance of the characteristics during the entire service and is among the best representatives of this category of cosmetic lasers.

Possibilities and advantages of the AURORA laser

The AURORA device is built on the basis of the Dilas module, which includes a block (stack) of 10 diodes separated by radiators with a large number of microchannels for the circulation of the coolant. It generates high power pulsed radiation at a wavelength of 808 nm, which determines the scope of use of this equipment.

The laser is designed to remove hair on any part of the face or body and allows epilation on all skin types. This capability is provided by an 808 nm high energy beam, adjustable within 20-70 J / cm2 and a wide range of changes in the temporal parameters of the light pulses. Energy with this wavelength is absorbed to the maximum by the tissues, whose cells contain a lot of melanin - the stems and their follicles, which due to heating lose their ability to continue vital activity. At the same time, cells with a lower melanin content are practically not subject to heating of the waves and are not damaged during handling. Painless and non-invasive laser hair removal for tissues is based on this mechanism.

The cells of the epidermis and dermis have a "transparency window" for waves at 808 nm, which allows energy to penetrate deep into the tissues and remove not only the "soft" hairs on the face or forearms, whose follicles they are located quite close to the surface, but also the hair on tanned skin. This radiation also ensures effective hair removal when the follicles are located deep, for example in the armpits or in the bikini area. Some decrease in efficiency is observed only in extreme situations: removal of very light or gray hair on light skin or during manipulations on a very dark or tanned surface. At certain settings, the device can also be used to perform other manipulations, which characterize the diode lasers: lightening of pigment spots, rejuvenation of the dermis, smoothing of wrinkles, etc.

The advantages of the AURORA model are not limited only by its versatility during treatment, but also include a series of design features that guarantee significant advantages.

This advantages of AURORA are:

use of a 600 W diode laser unit produced in Germany with liquid (water) microchannel cooling of each of the 10 emitters;

large working area of ​​the radiator - the beam covers the area of ​​12x20 mm, which allows you to speed up the procedure;

possibility of continuous work up to 12 hours thanks to the effective cooling of the leather, the hose and the internal blocks of the main module;

Intelligent microcontroller control with a large number of pre-set and editable parameters during session preparation.

At the same time, it should be kept in mind that there are restrictions on carrying out this procedure and some requirements must be followed after the course.

Laser hair removal is not performed:

to patients with acute infectious diseases;

to patients with skin diseases;

in the presence of serious chronic diseases - epilepsy, allegories, etc .;

in the presence of open wounds;

with the tendency to form keloid scars;

less than 2 weeks after other types of epilation;

in case of hypersensitivity to hydroquinone or to other types of lightening substances;