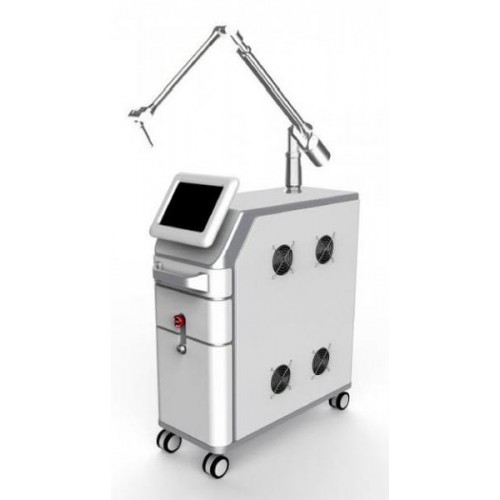 We present our latest laser D-LAS70 to remove non-ablative skin pigmentation, telangiectasia, and permanent makeup. The handset Solid Q: switch Nd: YAG laser, c active medium based on YAG doped with neodymium, with a wavelength of 1064nm and 532nm. The source of energy (system of optical pumping) serves as the light arc krypton lamp. Lasers of this type are the basis of the most modern and effective laser systems for removal of nevi, telangiectasia, age spots, tattoos, tattoo eyebrows and lip lines, pigmentation of black, blue, red, brown, and hair removal.

With the help of modern laser technology used in the model D-LAS70, you can, without pain and scarring, solve almost any cosmetic problem.

Do not harm the hair follicle and normal skin, it does not produce any scars.

A minimum of pain, that allows not to use anesthesia.

It uses the most advanced pulsed laser technology.

Use a high quality solid-state laser in line with international standards.

The presence of the guide beam for determining the operating area.

The size of the light spot adjust the lens focus.

The question arises - what is so good Nd-laser and why it is so indispensable in the practice of cosmetology? Let s find out the reason for the indispensability.

Laser - a source of electromagnetic radiation of infrared, visible and ultraviolet ranges. The action of the laser based on the phenomenon of stimulated emission of atoms and molecules, discovered by A. Einstein in 1917

The term "laser" - an abbreviation of the English phrase "Light Amplificationby Stimulated Emissionof Radiation", translated as "light amplification by stimulated emission in."

The active medium is the basis of the laser determines the parameters of its radiation. The material for the active medium may be a solid (crystal, alloys, semiconductors), gases (noble gases, the halogens, CO2, gas mixtures), or dye solutions. The composition of the active medium depends on the wavelength and other parameters of the laser radiation. Activated working fluid with electromagnetic waves or strong light flux, which leads to an increase in the internal energy of the majority of molecules and atoms. The moment of the return of spontaneous energy of individual molecules and atoms of the working environment to its original level is accompanied by the generation of a quantum of light (photon of electromagnetic radiation). The collision of a photon with a different target excitation is accompanied by the release of her her photon (photon-stimulated - stimulated), and he in turn will give rise to the next, etc. which leads to the avalanche generation of more and more stimulated by the photons of the same energy. This phenomenon is called stimulated emission (stimulated emission).

Unlike other light sources, the laser has a number of unique properties due to the coherence and high radiation directivity, which allows the creation of enormous energy density, concentrating the electromagnetic energy in very small volumes using conventional optical systems.

In this case we are talking about Q: switch Nd: YAG laser, which belongs to the group of solid-state lasers with an active medium based on aluminum-ittrievevogo garnet doped with neodymium.

Such a laser emits radiation in the near infrared range (wavelength 1064 nm). Light of this wavelength is well absorbed by endogenous chromophores main skin - hemoglobin and melanin, but slightly delayed the skin surface. As a result - the radiation generated by Nd-laser penetrates the tissue to a depth of 1-4mm. These properties define the basic scope of this laser - removal of different subcutaneous structures without damaging the skin. Which it allows you to simply get rid of various skin defects, tattoos and permanent make-up.

For comparison, the radiation of the CO2 laser has a wavelength of 10,600 nm, and completely absorbed by the water at a depth of penetration 1-20mkm and accompanied by a rapid heating of water, and from it and nonaqueous components of the tissue. As a result, the explosive vaporization of tissue water (effect of vaporization) and the eruption of water vapor, along with fragments of cell and tissue structures beyond the ablation of tissue with the formation of the crater. Accordingly, CO2 laser can be used if necessary ablation of the affected area of the skin, including the epidermis, and is widely used for skin rejuvenation, removal of a benign tumor of the skin (warts, xanthelasma, mucous cysts, cherry angiomas, leukoplakia) and for surgical cutting.

- Quasi-cw (quasi-continuous) lasers (interrupted continuous wave short segments). The laser can be paired with a crystal of potassium titanyl phosphate, which doubles the frequency until the wavelength of 532 nm in the green region of the spectrum. It works in batch mode, with quasicontinuous packages pulses 150 nanoseconds, almost as continuous. Depending on the parameters of the laser radiation penetrates into the skin for 1-4 mm;

The emergence of a neodymium laser allowed to optimize methods of rejuvenation and getting rid of skin from a variety of dermatological defects. In this type of cosmetic laser device is used for the following purposes:

The goal of treatment - selective destruction of abnormally dilated blood vessels without damaging the structure of the surrounding tissue, preserving normal color and texture of the skin. The larger heating of the blood vessel, and deeper penetration into the skin tissue is achieved with minimal epidermal heating and scarring. All these requirements are met by Nd: YAG laser, τ = 50-250 msec at an average power of up to 40 watts.

This procedure simultaneously with laser irradiation is used and dynamic contact cooling of the epidermis. The laser is able to induce thermal stimulation of fibroblasts within the dermis papillary and reticular dermis, while cooling the epidermis protects the skin from termoozhogov, minimizing the risk of scarring and hyperpigmentation. Selection of radiation energy density associated with the surface temperature of the skin, which is maintained at below 50oC to prevent vesiculation (blistering) or scarring. When the temperature reaches 60 derma-65oC, causing wrinkling and collagen stimulation neocollagenesis.

Using Nd: YAG laser (1064 nm) for the revitalization of the skin showed that the procedure is well tolerated by patients of all skin types, the reconstruction of photodamaged skin occurs gradually, with a decrease of coarse wrinkles, scars and skin laxity.

Infrared radiation penetrates most deeply into the skin and well absorbed by melanin, and is hardly absorbed by the lipids, proteins and nucleic acids. To improve heat removal from the skin using a variety of substances with high thermal conductivity (ice, gels, sapphire), and transparent to the laser beam.

Radiation Nd: YAG laser (1064 nm) minimally absorbed by the skin, penetrating into the deeper layers, but has the least selective absorption by melanin, compared with other lasers (e.g., diode, 808 nm). The pulse duration of 100 nsec to 50 msec.

Laser hair removal Q-swNd: YAG laser has its own characteristics. The skin is rubbed coal microsuspension which absorbs laser light, causing a thermal effect. Due to the rapid increase of the temperature of the coal particles blow, knocking the membrane surrounding cells. The effectiveness of hair removal is quite low. A month later, again 40% of the hair grows, and three months later their number doubled.

Long Pulse Nd: YAG laser (pulse duration of 50 msec and a fluence of up to 50 J cm-2) has the greatest depth of penetration into the tissue and is effective for patients with darker skin as compared to other lasers.

Using Nd: YAG laser is only effective for the majority of black and dark blue pigments. Doubling the frequency of the laser radiation, λ = 532 nm, allows to effectively treat the red pigment (> 75%) and the orange and purple. However, the yellow ink handled poorly, apparently due to the strong decrease in the absorbance over 510-520 nm. Due to the large absorption by melanin and hemoglobin radiation of 532 nm, often appear blisters and redness.

As we are now understand neodymium laser really has unique abilities and can be used in cosmetic solutions for a very broad range of applications.