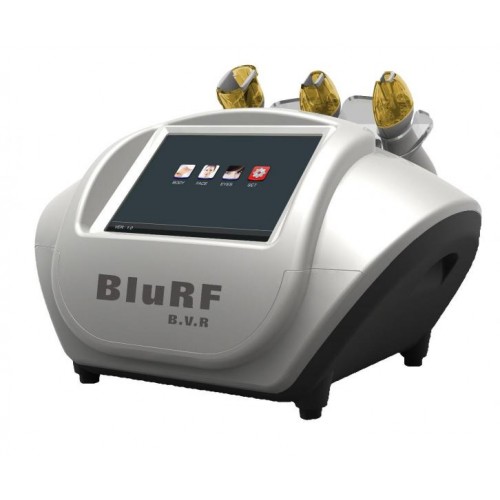 The multifunction device blurf combines three modern and very popular cosmetic treatment method. Vacuum therapy, radiofrequency lifting and the photons in the spectral range 440-485 nm treatment. We would like to elabora... Read more...

We would like to elaborate at this point on the photon treatment and the radio frequency (RF) Lifting.

The full-body photon therapy is a method for cell stimulation, immunomodulation, hormone regulation and harmonization of body and psyche. Light is life! Without light, life would not be possible and the positive effect eg of sunlight on our wellbeing knows every one. But how far the importance of light for humans really enough, can be guessed only since the Bio-Physics was able to prove now that light is present in every cell of our body. When cells are injured, can according to the intensity of this light. However, if you injured and weakened cells light in the form of photons, they are encouraged to regenerate. The blurf uses this healing power of light on the biological stimulation of the cells and the harmonization of the hormone production. The device produced by the light photons are absorbed by the skin, multiply and spread "chaos" in the body. About the ramifications of the nervous system, they travel to the brain. Here they have a regulating effect on the production of hormones such as Endrophinen and cortisol. Endorphins are found in many areas of our body. The so-called "happy hormones" are responsible for many body functions, such as for pain relief and our general well-being. Endorphins control the stress responses of the body, and the cardiovascular, digestive, respiratory and thermoregulatory. In Patienen with chronic pain has found a decreased endorphin levels in the cerebrospinal fluid. With the photon therapy can raise and relieve the pain of endorphin levels. Serotonin is - as we know today - among other things a natural appetite brake. The stimulation of serotonin harmonization is therefore - in conjunction with a change in diet for weight loss is a natural way to lose weight. Evidence of treatment success by the photon therapy are now in: eczema, including Skin diseases, hyperactivity in children, sleep disorders, autonomic disorders, depression, hormone deficiency / - excess, pain, hypertension, burns. The therapy with the blurf acting on the autonomic nervous system, which controls all the unconscious functions of our body. You can contribute significantly to strengthening the Immunsystemы and extraordinary influence many diseases positively.

The use of radio frequency is currently the most modern treatment methods for skin tightening and cellulite. Over time, the skin loses its elasticity and firmness, wrinkles develop. This process is influenced not only by genetics and hormones also by environmental factors such as UV radiation or nicotine. The collagen fibers in the skin are damaged while and lose partially their ability to recharge. The regeneration of collagen can be stimulated by radiofrequency treatment. Radiofrequency therapies extend painlessly and quickly lead to smoother skin on hips, legs and buttocks. In several meetings, a specially shaped handset to the affected cellulite locations is set in out-patient anti-cellulite treatment that emits low- and high-frequency current into the subcutaneous tissue. The radiofrequency therapy has already been successfully used in the treatment of varicose veins and snoring, but the investigations are to their action in the anti-cellulite treatment not yet completed. Although causes, treatment with the radio frequencies used no pain, however, is a modest amount of heat on the skin feel. The radio frequency device is poled two-fold and can be adjusted to different wattages. The waves heat the skin in depth, so that the subcutaneous tissue up to 44 degrees is hot. Thus, the collagen is destroyed, which is aged and relaxed responsible for the tightening of the skin and cellulite. As a result, inflamed connective tissue, the body produces new collagen and the skin tightens up again. The perfusion of the tissue is stimulated, which promotes the removal of deposited materials and slag. As a result, the skin looks fresher after the treatment. Even a weight loss during radiofrequency therapy is not rare, since the fat cells are damaged by the waves and shrink. Radiofrequency sends deep heat to the collagen fibers. The gentle vibrations are used against local wrinkles, drooping mouth, circles under the eyes, deep forehead wrinkles, brittle skin scaffolding, double chin or to beautify the necklines.