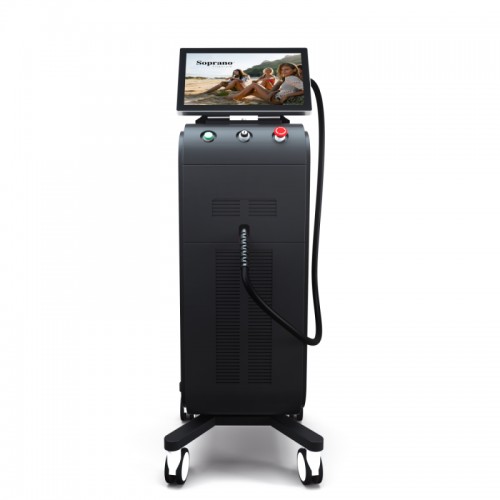 The quality of cosmetology equipment primarily determines the quality of the procedures performed with its help. Therefore, if you are looking for a truly effective and reliable laser for hair removal, the SOPRANO TITANI... Read more...

The quality of cosmetology equipment primarily determines the quality of the procedures performed with its help. Therefore, if you are looking for a truly effective and reliable laser for hair removal, the SOPRANO TITANIUM  system is exactly what you need. The combination of three wavelengths and a set of two maniples will allow you to cope with unwanted hair much faster and easier than you could imagine.

The main feature of the SOPRANO II laser is that it is equipped with three types of radiation, namely:

808 nm. This wavelength is generated by a diode laser, which is considered the gold standard for hair removal. Radiation provides the possibility of even darker skin, since the pulse rate does not have time to cause tissue heating. Most often used for processing hands, feet, beard.

755 nm. The type of radiation of the alexandrite laser is aimed at the melanin pigment in the skin and hair, due to which it can be used to remove hair only on fair skin. But the main feature is that radiation burns hair instantly, so it can even cope with hair lacking pigment. At the same time, it is considered ideal for processing delicate areas.

1064 nm. The wavelength of the neodymium laser, due to its excessive length, is considered the most perfect, as it allows you to remove hair even from African Americans without any side effects. The radiation is aimed at coagulation of blood vessels, and not at the pigment in the hair.

Among other things, the system can operate in three modes: HR, SHR Stack, SHR In-Motion. The first is a stationary mode of operation, the second provides a safe effect on sensitive areas, and the third allows you to speed up the processing of even large areas, without anesthesia.

Competitive advantages of the SOPRANO II laser are:

Among other things, the presence of a 15-inch touch screen through which the device is controlled allows specialists of different levels of training to work with it, due to the ease of use.