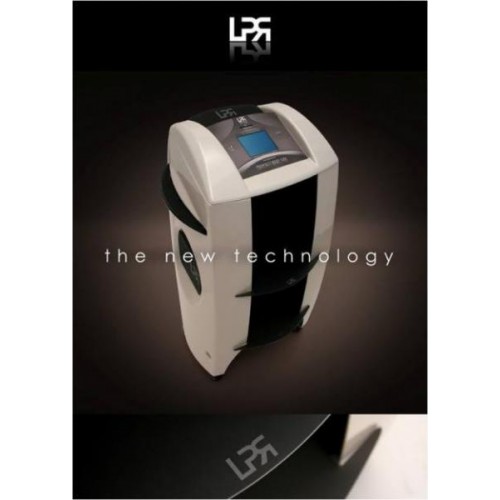 In the different cosmetic areas that have become quite complex and sophisticated over time and are subject to a clearly increasing specification, most treatments no longer manage without support from technical equipment ... Read more...

In the different cosmetic areas that have become quite complex and sophisticated over time and are subject to a clearly increasing specification, most treatments no longer manage without support from technical equipment and devices and by the influence of scientific and technological progress at all until realized.

With the multifunction machine ULTRASONIC WAVE 3045/43 we want to offer an absolute highlight of the high-tech apparatus cosmetics. You will be impressed.

The multifunction machine ULTRASONIC WAVE combines 3045/43, as the name suggests, more complex and highly successful treatment methods of the apparatus Cosmetics outstanding can be combined and complement each other perfectly in their effect.

With this device corrections may be made to the figure, fat and excess liquid removed and anti-aging skin treatments are carried out. The unique configuration of the instrument allows, in particular the implementation of vacuum massage, ultrasonic treatments, Electrolipolysis and infrared (IR) treatments.

As an example we want to dwell on the ultrasound massage that Electrolipolysis and infrared therapy here.

Ultrasound massage - ultrasonic waves also cause deep tissue massage in the tissue to be heat developed. Through this dual effect and additionally by the drug, the regenerated tissue; Fractures heal faster. The therapy is, inter alia, used for the following disorders: degenerative diseases of the spine, arthritis, rheumatism, muscle injuries (induration, strains, contusions), aching scar tissue or fractures. In case of skin defects and inflammations is a contraindication. By acting on the body ultrasonic occurs in the tissue in a mechanical and thermal effect. The mechanical action is a vibration effect. The sound pressure occurs in the surrounding tissue to strong compressions and expansions, which corresponds to the action of a powerful massage or deep tissue massage. The thermal effect is produced by the body s own tissue Schallresorption. This heat build-up may well be used therapeutically, but they also cause for caution. The skin absorbed far less noise than the periosteum, which can cause severe burns to the skin to the periosteum, even with only a slight feeling of warmth. The heat generation of the pulse noise is significantly less than the duration of the sound, so that when applied locally to bone only the sound pulse is used.

Electrolipolysis - The basic principle of Electrolipolysis is to initiate specific pulsed currents using 7.5 to 12 cm long acupuncture needles into the fatty tissue. It can be obtained the following effects: a) cell depolarization: Normally, the cells of the organism in a stable equilibrium. The cell itself is via metabolic energy will be able to create differences in concentration and maintain. This creates within the cell a negative membrane potential. At this membrane potential sodium, potassium, and chloride are involved. The sodium concentration is subject to an active process that constantly ions transported outwards under energy consumption from the cell interior. Under the influence of the negative charge, applied by the electric pulse, the positive potential of the outside of the cell membrane is reduced in the quiescent state and it begins a sodium influx into the cell. The previously negatively charged cell interior becomes positive and thus triggered and passed an action potential. Already during Depolarisationsvorganges, an opposite process designed to make the resting potential of the cell. This building maneuvers consume cellular energy, thus the amount of fat increases (fat as an energy supplier) from within the cell. Due to the constant loading and unloading of the cells, caused by the electricity, exhausted the energy of the fat cell, it bursts. b) neurohormonal effects: Due to the electrical stimulation occurs via a reflex arc of the autonomic nervous system to an increased release and activation of fat-dissolving enzymes (lipases). The activation of the sympathetic nervous system and in this case the specific binding sites (receptors), the so-called. Adrenergic receptors, there is an impact and release of catecholamines, the so-called. Stress hormones. These hormones cause a further fat loss (lipolysis). c) Direct appeal to the cells: About the acupuncture needles will be a direct stimulus to the connective tissue exercised experienced by doing a toning. About this toning, a tightening of the tissue can be achieved. d) Joule effect: It comes to an increase in temperature in the treated area. This temperature increase in the tissue leads to increased blood flow, thereby achieving an improved local metabolic situation. The toxins that are leaked from the fat cells can be removed. Lipolysis can be applied to local fat deposits (eg saddlebags). But it also acts against cellulite by reducing local fat. With the draining, at best, even with the dissolution of fat cells, there is a reduction of the bulging-filled areas between the Bindegewebsmaschen, the skin surface becomes smoother. There is a circulatory stimulation, thereby increasing the dissolved pollutants can (metabolic waste products) are removed.

Infrared Therapy - The visible spectrum ends at about 780 nanometers (nm). The subsequent infrared region is divided into IR A, B and C. For the heat treatment are mainly filtered infrared-A (780 to 1400nm) and B (1400 to 4000) of interest. Enter the heat energy to the subcutaneous tissue and have proven especially for colds, sinusitis, ear pain, lumbago, bruises and muscle tension than usual House and therapeutics. The infrared radiation is a form of natural solar energy, which heats the surrounding air only to a small extent. Approximately 80% of light energy is therefore converted into heat only when it encounters fixed body. The costs incurred in treating body 45 degrees are perceived as pleasant and beneficial. They therefore include a high physical stress, such as in the sauna, largely. An artificial infrared radiation is the natural radiation source, the sun, modeled. The short-wave infrared radiation is particularly gentle effect on our organism, since most of the radiation, the upper layers of skin and the seed layer permeates, without being absorbed thereby. The deep heat penetrates far into the lower regions of the skin. The skin and muscles are stimulated by the heat. In cosmetics afford infrared emitters good services. Thus, the pores are opened, for example, by the infrared radiation in the treatment of dry or fatigued skin. The nourishing cream can be optimally absorbed by the skin. Simultaneously, the irradiation causes better blood circulation of the skin and underlying tissues. A fresh look is the result. Briefly: infrared deep heat can cause the following:

- Relaxation of tissues and muscles

- Washing out of pollutants